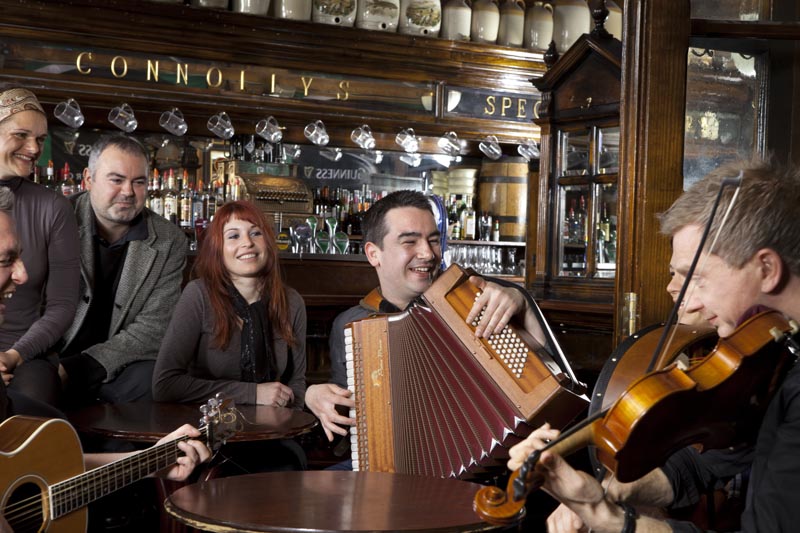 Galway is a city that attracts visitors with little effort. The thriving population, infused with new student blood every year, loves its festivals of which there are a bewildering variety. Galway loves its history and has many great historical attractions dotted around the City of the Tribes but what brings tourists and Irish native alike running to this European city is the authentic sense of Irish culture that you can imbibe in the city. Traditional music is a key component in that authentic atmosphere with some of Ireland’s best musicians plying their trade and enjoying their music on a nightly basis.

So if the thought of sitting back and tapping your toe to the sound of bodhrán and tin whistle or getting up and whirling around to a jig-inducing reel inspires you to spend a weekend in Galway in a clean and comfortable budget hotel like Travelodge Galway Hotels, then here are our choices of the Top Galway Traditional Music Pubs.

The Tigh Coili pub in Galway is famous for its traditional Irish music sessions and its reputation is founded on mightily solid foundations. You can mosey on down to Mainguard Street in the city centre and get high on the traditional atmosphere and the traditional music sound. There are no interruptions to the high quality music as there are no TVs on the premises; the entire focus of Tigh Coili customers is who’s going to be playing next. There are traditional music sessions at 6.30pm and 9.30pm every night of the week so visitors have no excuse to not join in the foot stomping at Tigh Coili.

Like Tigh Coili, Monroes Tavern on Galway’s Dominick Street is in the heart of the city centre, just opposite the Spanish Arch. It too is one of the best places in Galway to listen to great traditional Irish music with nightly sessions. Monroes has the added advantage of Tuesday night Irish set dancing though. Everybody can hop onto the dance floor, having studied the easy-to-learn moves, had a few pints and screwed up their courage to take on the Walls of Limerick and other famous ceili dances

The Western Bar, just off Galway’s central Eyre Square is the place to be if you’re in the city of a Thursday night. 9.30pm sees the cream of local traditional musicians on stage and many more in the audience, ready to jump up and join the session. The Western Bar is so popular with local musos that you might see as many as 20 quality players up on stage at any one time. A bar with the perfect acoustics for Irish traditional music and egged on by an enthusiastic crowd, the Western is not to be missed by visitors to Galway.

Another every-night session in the city, the Crane Bar is renowned for the quality of the traditional music played there. Commentators in the know have often called it the home of traditional Irish music in Galway and it’s certainly where many soon-to-be-famous traditional stars made their debut and their reputation. When 9.30pm hits, the fiddle bow is unsheathed and the toe-tapping commences and you are lost to a world of Irish traditional music. If you fancy a break from all the tin-whistling, then the bar below is a lovely mix of locals and visitors to the city ready to chat as they sip their pints of plain.

One of Galway’s most historic pubs, the Quays, located appropriately on the famous Quay Street in the city’s Latin Quarter, has been a place of refuge for Galwegians for almost 400 years. Over the centuries, it’s heard the dulcet sounds of many of Ireland’s greatest traditional musicians and continues to do so in the modern day. Several nights a week, you can listen to top class professionals playing the best that Irish traditional music has to offer. The Quays also offers a venue for the talented or learning amateur musician so if you happen to have a tin whistle, bodhrán or fiddle on the seat beside you, then jump up on stage and join the session.